A source citation is placed in your text at the time you refer to a work by another author(s), as a paraphrase or quote. A citation is a short reference in the text to a full description of that source in the reference list.

An in-text citation is the same for all types of sources and consists of author (WHO), date (WHEN) and page number(s) if any. 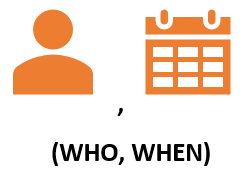 All other details of the source consulted are included in the reference list.

From the in-text citation, the reader cannot yet tell what type of source it is, so the reader must look up the source in the reference list.

An in-text citation is part of a sentence and can be placed at the beginning, halfway or at the end of the sentence.

You decide where the citation is placed, as long as it is clear to the reader which part of the text is your own work and which part is based on another source.

In-text citations can appear in two formats: parenthetical and narrative.

It can be distracting for the reader if the text is interrupted by the same source citation each time.

Tip: If you are basing a chapter in your report on a research method from a book and you are using a paraphrase, it is better to mention it at the beginning of the text, for example:

This chapter is based on chapter 7 from Doing Research (Verhoeven, 2019), which discusses the design and conduct of a quantitative study.

- if you are going to cite during the writing of that chapter, then the page numbers must be listed separately,

- if you cite another source in this chapter, then the earlier source must be cited again, so that there can be no doubt as to which source you are referring to.

WHO: one or two authors

You always name one or two authors (or editors) when you paraphrase or quote.

How a reference should (exactly) look like in the text is determined by the structure of the sentence. For example, you can:

If you refer to the same source several times within the same paragraph, you do not need to mention the year again after the first reference, at least if you named the author in the text.

WHO: three or more authors

In case of three or more authors, mention only the first name with the addition et al. (Latin abbreviation for et alii, "and others"). Example:

Tip: See also Chapter 8.17 of the Publication Manual of the APA.

WHO: surnames with prefixes

Prefixes as 'de la' or 'van', common in European names, are part of the surname. It is advised to always capitalize the prefix, both in the text and in the reference list.

In the reference list, surnames with prefixes are alphabetized by the first letter of the prefix.

Separate references to two or more works by different authors with a semicolon. Place references in alphabetical order (i.e., the same order as in the bibliography).

If no personal name is listed as the author, the responsible organization is listed.

According to the Center for Ethics and Health (n.d.), employees in youth care experience great workloads.

In the second reference, you may use an abbreviation, as long as it is well established or readily apparent. You introduce the abbreviation as follows:

- If the full name of the organization is in round brackets, put the abbreviation in square brackets.

- In the following reference(s), the abbreviation is sufficient.

If there is no author or organization, the title is mentioned. If the title is long, it may be shortened to the first few words.

The album can only be listened to temporarily at the museum (New album Sticks, 2019).

The webpage New album Sticks (2019) says that starting in September, the album will be heard at the museum for four months and then nowhere.

For a book or magazine article, state the year it was published in parentheses.

If the date of publication is not known, use n.d. ("no date") in parentheses.